How Many DMCA Notices does the RIAA send every year?

How Many DMCA Notices does the RIAA send every year? This is a question I've been asking myself (and others) for years now.

The solution was pretty obvious...on the tip of my proverbial nose the whole time. The RIAA appears to use a sequential numbering system in its case tracking system. There is no way to tell what percentage of the cases represented in their case tracking actually lead to a generated DMCA notice. Duplicates or false positives may account for some percentage of this figure. Judging by the number of duplicates and false positives that we actually receive, I would guess not. In looking at the volume, however, I’d be willing to bet that each case number represents an individual DMCA notice.

Using the sequential numbers as a framework, you can now estimate how many DMCA notices were sent on a monthly basis. The numbers also vary widely over time, so you can’t assume that the same numbers of notices are sent every day. In one twenty four hour period in July, the numbers increment by nearly 600,000. Most 24 hour periods see less than 100,000.

Based on the claims that billions of dollars per year are lost to illegal file sharing, these numbers might seem low, however, the RIAA and others have never claimed to be able to catch 100% of all file sharing. This is undoubtedly a fraction. If you still think that these numbers are low, however, think about what these notices do to ISPs and Universities. Each notice probably takes between 30 minutes to address the forensic work that needs to be done to find the user, validate that there was network traffic at that time, send a notice to the user, and interact with the user afterwards. Even if only 20% of DMCA notices go to Universities, that means Universities probably spent nearly a million man hours responding to DMCA notices in 2010. In only the first 7 months of 2011, the RIAA has sent 4 million more notices than in all of 2010, which means the total for 2011 will probably be double that of 2011. 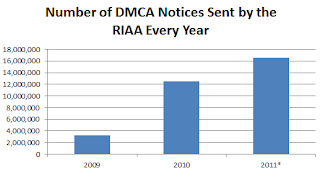 Posted by George Finney at 7:18 AM

Email ThisBlogThis!Share to TwitterShare to FacebookShare to Pinterest
Labels: DMCA, filesharing, how many DMCA Notices does the RIAA send every year, P2P, RIAA, spike in DMCA notices

Support this blog by buying my book on cybersecurity for laypeople. Once upon a time there was a company that made magic wands, but when they were hacked all the magic in the world couldn’t prevent their data from being stolen. If that company had a chance for a clean start, what would they have done differently? The unlikely hero isn’t a security guy. She’s a business elf who makes it her mission to change the way her company does business from the top down. Most books on Cybersecurity are written for highly technical professionals, focus on specific compliance regulations, or are intended for reference. No More Magic Wands is different...it takes complex security concepts and puts them into practice in easy to read, relateable stories.

George Finney
George Finney is an attorney and science fiction novelist. He is currently the Information Security Officer for Southern Methodist University and has been in Information Technology for over 10 years. Posts to this site shouldn't be considered legal advice. What he writes here are for informational purposes only. George is not your attorney. Please consult one before making any big life decisions.